a little farm by the sea 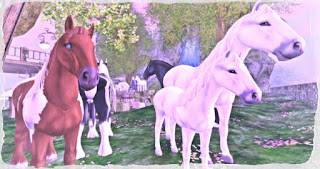 My mares have been giving birth left right and centre. 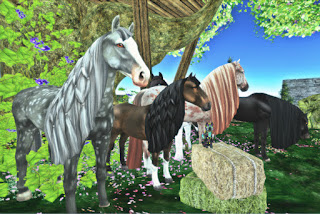 Here is my dapple gray Orlov Trotter mare with her French Trotter foal. I really wanted a Baskir Curly like his dad standing next to him but it was not to be. 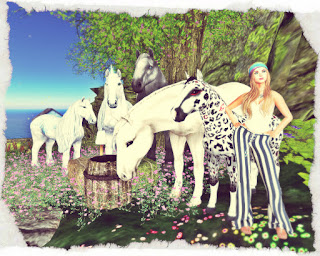 Then my Gypsy Vanner gave birth to a little mare just like her while my white Camargue gave me a Westphalian with the 2016 anniversary costume coat. I think it's cool that they can pass their costumes. 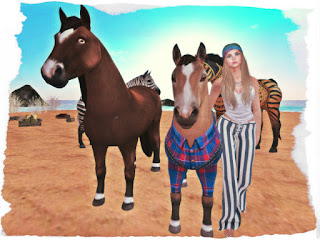 As is the case with my little Exmoor pony wearing a Farmer Bay costume coat. 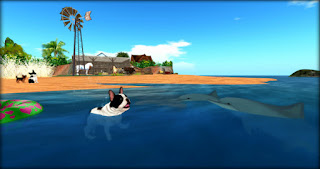 I've had to use my shop parcel to keep some of my extra horses and ponies and after leaving them out in the sun for some time, I've made a little shack for them and added extras like the puppies from Jian and the hay wagon setup the Summer Farm Scene in the picture below for only 50L from Simply Shelby at Melville's California Dreamin which opens till August 20. It also came with a pair of cows which I edited out. There are a whole lot of other 50L and 50% off setups on sale there. So hurry! 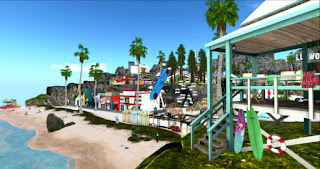 Above is part of the California Dreamin scenery.

And finally, Moon is wearing the latest pants from COCO which you can get at the Knot & Co. She is also wearing an old Truth hair. As usual, she has on the Monica skin From Deetalez and the Lelutka Simone Bento Head together with the Maitreya Lara Mesh Body.
Posted by Moon Falconer at Wednesday, August 16, 2017 No comments: