A few more free stuffs I got while doing the rounds:

Hair: A&A Misa Hair jet black(marketplace, was free when I bought it)
Outfit: SZD Distraction  MMboard (comes with glasses and bracelets too)
Boots: Muism Troy Boots(MHOH gotta go get it) 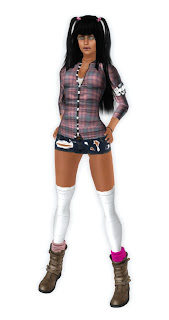 Outfit: Divalicious Daisy 60 mins camping chair(you don't have to be a member to camp)

I have to admit, it was fun tping around finding free stuffs, dressing up Carter the way I never would dress up Moon. But! It was also tiring. I also don't use Carter to interact with people except with a couple of friends.
I now have too many outfits and stuffs that I doubt I'll ever have time to take pictures of them, coz there are so many other things I want to do in SL. 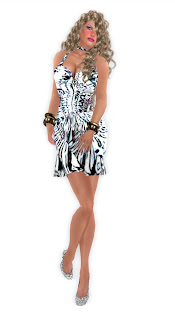 Outfit: Jador(not free)
Jador's closing today and I bought this outfit yesterday. If I had a whole lot of lindens to spare, I probably would get their couture gowns just because but since I was being practical(where would I go wearing those fancy gowns except to take pictures once?), I only got this cocktail dress.

Some of the girls having fun wearing the same daily 25Ldeals raunchy outfit from HoWear and dancing to live singer Hazie Moonwall.