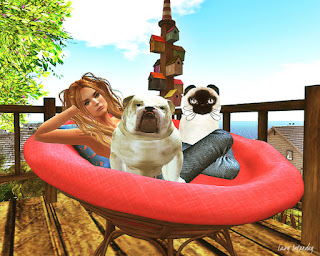 When I am not inspired to build, I like to take pictures of my pets. Here is Moon with Jack the Bulldog and Norita the Scottish Siamese Seal enjoying a lazy Saturday in Sway's FLF Agwe Moon Chair. 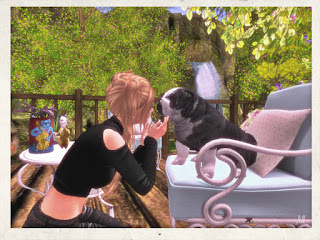 Here is Moon giving Jill a little PDA. When I was getting a whole lot of dogs, I had no idea that these Bulldogs would turn out to be my favorite. They are utterly adorable to me. I've never met a real bulldog so I'm not sure if it would still be the same. I've met a real pug and I have to say, I prefer the real one than the virtual one:( 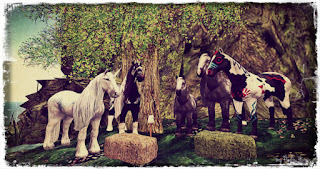 Anyway, I added 2 more horses to my 'stable'. I don't have a stable. I just leave them on a little island next to the treehouse. The white horse is a Gypsy Vanner. I had no idea that when I bought her, she has in her dropdown menu under equipment the unicorn horn. So I am overjoyed that I actually have a UNICORN! Next to her is my Plains Kaiila which I found out at the same time, also have in his equipments, spikes! Now he looks really fierce. My other new horse is the American Paint Horse. I bought him for his colourful markings and the feathers in his tail and mane. 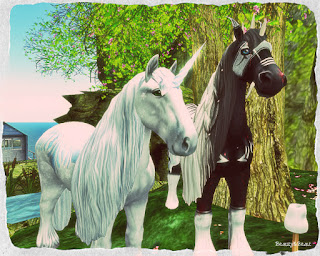 Here is a close-up of my Gypsy Vanner and my Plains Kaiila. Beauty and Beast!
Posted by Moon Falconer at Sunday, July 16, 2017 No comments: